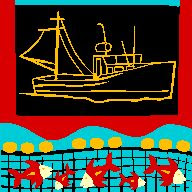 I was asked a “what’s the catch...” question the other day after sharing the success of our program with a potential client.

“…okay let me sum up what you are trying to tell/sell me; - - you say that we can discharge less than 2% of the total water used in our cooling towers, - - get extremely low corrosion rates, - - have zero heat robbing deposits, - - no biological growth, - - no need for any chemical once the protective WCTI chemistry has been achieved. You go on to say that we can actually use recycled waste water without using expensive pretreatment equipment like HERO, demineralizers and do not need to build evaporative ponds and also stop the need for post tower bleed treatment etc… How can that be??... Furthermore, you say we can do all this in most cases for less than a chemical program? OKAY, what’s the catch?”

Not being a fisherman myself, and seeing that the client was an avid fly fisherman (personally, I prefer seeing fish fly at Pike Place Market - its a Seattle thing), I thought hard for a good fish analogy to explain how it is we were able to provide all that we are seeing with WCTI chemistry – and all I could think at that very moment was - “give a man a fish and feed him for a day, or teach a man to fish and he will be fed for a life time”. Then I thought, let’s not go down that road but rather suggested that “there are lots of lures in our WCTI tackle-box” – and the biggest one is MOTHER NATURE!

Then I thought of answering his "What's the catch?"question by offering up my explanation as to why this sustainable natural green chemistry had not been used prior to WCTI’s offering. Maybe that would stimulate an answer for him without having to go into a lengthy and sometimes complex discussion on silica species, high TDS, pH chemistry etc…

Okay, “the catch” as I explained further, could in a way be summed up by what goes on in the board rooms & labs of many chemical marketing and manufacturing companies. For all intense and purposes, manufactured and blended chemicals are the life blood of the water treatment companies. There is nothing wrong with that - that is what they do well. Their business profits are tied, almost exclusively, to the delivery of a drum of chemical – pure and simple. You see, their managers and chemists now know that this patented silica based chemistry works and does what WCTI has claimed. However, it just does not meet their business model or in their standards of operation. Selling water and manufactured additives in a drum has met the industries needs for cooling tower water treatment for many years. You see there really has not been any “newly discovered” molecules for some time now to treat cooling towers for scale, corrosion and biological concerns; so...

QUESTION: What are we going to do as a chemical company to gain new cooling tower business?

ANSWER #2: Or... let's go out and minimize, trash and create doubt about all chemical treatment alternatives, whether we believe it or not.....?

Don’t get me wrong, manufactured chemical additives do work and have been used for water treatment for nearly a hundred years now (i.e. boilers, closed loops, waste treatment and other specialty uses etc...). This sustainable natural green chemistry on the other hand has been around since the beginning of time and could very well have been used by Socrates (if he had a cooling system - maybe he did?) without one drop of the yet undiscovered, Alchemists formula’s.

SUMMARY: Keeping this short and sweet and sticking with the fish theme; ... you can broil and fry fish, but unfortunately, my friends are only selling you the cooking oil for the frying pans!

Posted by gordonguthrie at 4:49 PM No comments: 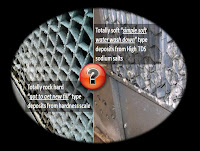 Due to the nature of cycled up cooling tower chemistry, "wet/dry - wet/dry" deposits accumulate on surfaces such as drift eliminators / louvers / fill / splash guards. Unfortunately, up until WCTI high TDS water chemistry, this build up was a hard and tenacious CaCO3 type scale from chemically treated systems. Now we see that WCTI with its higher TDS water, appears to build slightly different deposits - is this a problem?

No - These deposits are now non-adherent and highly soluble since they no longer contain the hard scale forming ions of calcium and magnesium. Deposits can now be easily washed down with HES conditioned water at garden hose pressures saving man-hours and damage to the fill caused by high pressure cleaning. A side benefit of washing down your tower is that it actually keeps your tower externals looking cleaner, free from dirt, algae and scale deposit buildup.

Posted by gordonguthrie at 5:47 PM No comments:

"Oh my goodness! Where did all that silica go?" 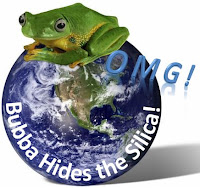 I am having so much fun watching the major chemical companies, especially those that have placed their entire marketing strategy on chemical treatment, make a complete fool of themselves by showing their ignorance (or should I say their flummoxing and befuddling campaign) about Silica based chemistry.....

Their sales forces are desperate and making remarks like "... where did all that silica go?...." In the meantime their PhD's back at corporate are quietly wishing their salesman would simply clam up and be quiet and not dig deeper "dummy" holes for their respective companies.

Their marketing managers are either being complicit in letting their field personnel try to shoot this technology down with real misleading rhetoric or are completely on board and do not understand basic poly-silicate chemistry!

I am not going to spend a lot of time trying to educate my competition, other than to say "...guys do your homework - please! - you are embarrassing yourselves..." 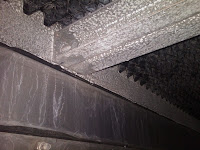 Here in the PNW (and anyone else in this range of make-up water), regardless how well you passivate and follow cooling tower manufactures recommendations, your galvanized tower basin, tubes and support structure is going to still have White Rust appear and sometimes severely.
You see, good passivation is important and should be practiced, however, all you have to do is just lose your chemical treatment or lose your solids for just a moment; more especially your pH (alkalinity) - you will fall right back into the conditions outlined by the AWT/CTI organizations that list the causes for WR in no time flat.
To avoid extremely high HTI (holding time index), we need to run these chemical programs right on the edge of the WR domain. You see we have a serious corrosion problem up here where you can run the Ryznar Indices and find you have it > 12 - or run the LSI and get -2.6; you are doomed with galvanized. The good news is that more and more contractors and customers are requested and installing SS basins.
However, when you run WCTI conditions and follow proper start-up, your white rust can and will stop and it will be protected by our silica based corrosion control in a much broader range.
Posted by gordonguthrie at 9:11 PM No comments: 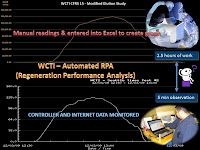 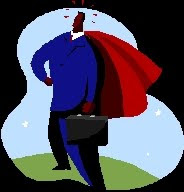